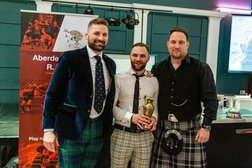 Following their annual dinner and awards ceremony, the event was held at the landmark city-center venue, The Aberdeen Douglas Hotel, April 29.

My Name’5 Doddie Foundation raises funds to aid research into Motor Neuron Disease and improve the lives of those affected. The foundation helps to fund grants, giving considerable sums to our friends at MND Association and MND Scotland to administer to individuals and families living with MND.

More than 140 people attended the event including north-east rugby players past and present, local businesses, and former long-serving Scotland rugby captain John Barclay as an after-dinner speaker. The money was raised on the night by a charity auction, raffle tickets, and donations from the club’s event ticket sales.

On the international stage, John Barclay won 76 caps for his country, captaining the Scotland team on 15 occasions, and won the last of his caps at his third Rugby World Club in Japan in 2019. He provided an insight into how he dealt with adversity throughout a 17- year professional rugby career and the ups and downs of a professional sports career.

Charlie Catto, head coach for the men’s team, said “We know it’s been a difficult time for everyone these last two years, so we want to make sure we’re doing our bit in the rugby community by making sure the money is given back. Our players had chosen to raise funds for MND charity, the My Name’5 Doddie Foundation, and will be doing further work to raise funds over the coming season for them and our local club.”